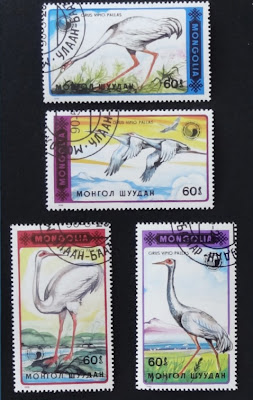 This 1990 stamp series from Mongolia features the white-naped crane (grus vipio pallas), the fourth rarest crane in the world. It breeds in Mongolia at the borders of Russia and China and winters along the Korean peninsula around the DMZ of South Korea and also in Kyushu in southern Japan. It is threatened mostly by development and loss of wetlands. Agricultural expansion and the demand for water at both the breeding and wintering grounds is not helping, Neither is the prolonged drought that is expected to last until 2015 helping. Their preferred breeding areas are marshes, wetlands and flooded meadows. In winter they live in rice paddies, mudflats and brackish marshes. Apparently the switch from spring to autumn ploughing of rice paddies in Korea has affected their foraging. Grass seed, rice, wheat and insects, worms and grubs are what they like to eat.

The male and female look the same with a slate grey body, white throat and vertical white strip from their crown down the neck, all set off with a prominent red face. Their most distinguishing feature is their pinkish legs (no other crane has this). 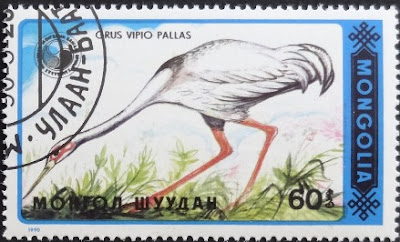