It is a long, winding drive from the highway to see some of the light houses of the Bruce Peninsula, and on this occasion the single track road was, while not treacherous, at least a bit nerve-wracking as far too many people drove way too fast. I was glad my friend suggested this day trip (and equally glad she was driving!) as I might not have bothered. 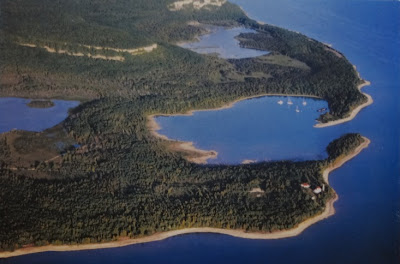 This postcard shows Wingfield Basin, on the Georgian Bay side of the peninsula. That cluster of white buildings with the red roofs on the bottom right shows the "Cabot Head Lightstation and Visitor Centre, surrounded by Wingfield Basin Provincial Nature Reserve and backed by the limestone cliffs of the Niagara Escarpment". 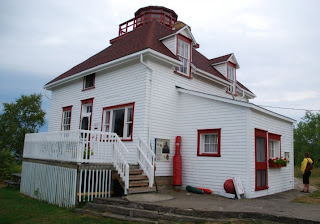 These photos show the lighthouse as it is now at 107 years old.
the lighthouse isn't as tall as you might expect, mostly because it is already 80' above the water on a cliff. 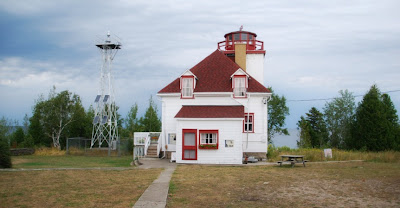 below is a postcard showing the original range light and tower that was demolished around 1970 when a government mandated automated airport type light was installed. A steel tower then replaced the (always precarious in a lighthouse) wooden tower. In the mid 1980s, the light station was completely restored by the Friends of Cabot Head and is now run as a museum and interpretive centre. It is located in a relatively isolated area so was built quite a few years later than many of the other light houses. 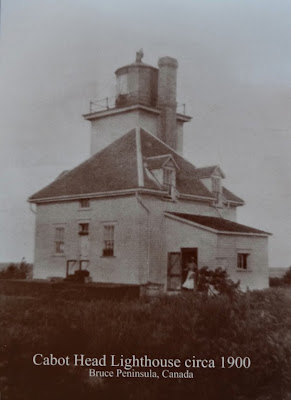 "This unique lighthouse was established in 1896 to guide ships rounding Cabot Head on the often turbulent waters of Georgian Bay. Today it is maintained as a museum by the Friends of Cabot Head"

A separate residence was built in 1958 where a manager now lives. But, you too, could become a volunteer light house keeper giving tours and doing minor maintenance and living at the house for a week from mid-May to mid-October. Apparently there is always a waiting list. You might first want to check out this map here and read about more about the lighthouse and the volunteer program here