It took a fair bit of sleuthing to find information on these stamps. At least to get the information I wanted, which was to find something interesting... 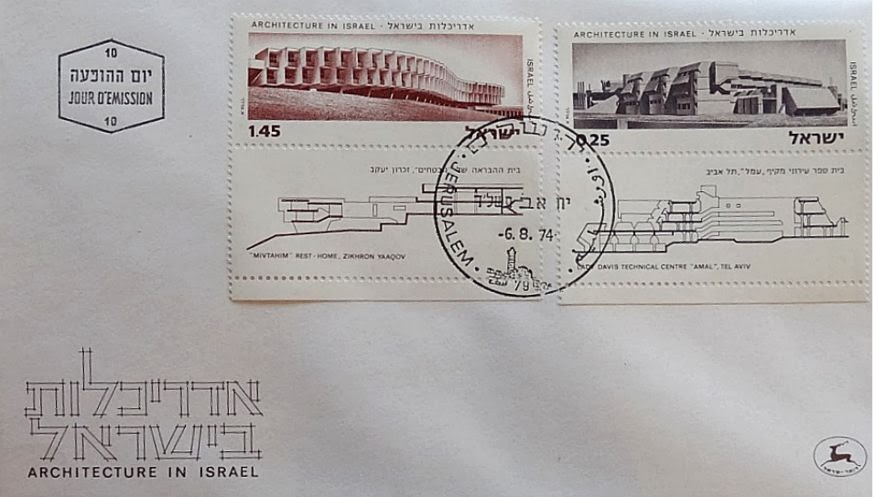 I found these Architecture in Israel FDCs (a set of three stamps issued in 1974) at the local stamp fair last weekend. The "modern" architectural designs in Israel seems to be much more innovative and creative than much of what we have in North America.
Although none of these buildings are in Jerusalem, that is where the cancellation mark is from. 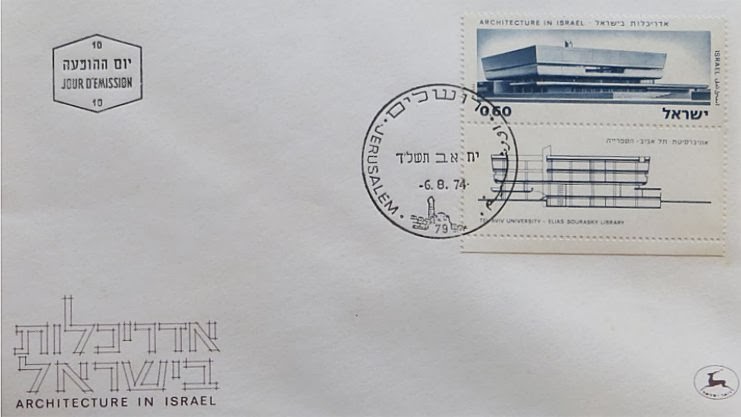 The Elias Sourasky Library at the Tel Aviv University was built in 1954 by Michael Nadler, Shulamit Nadler and Samuel Bikson. 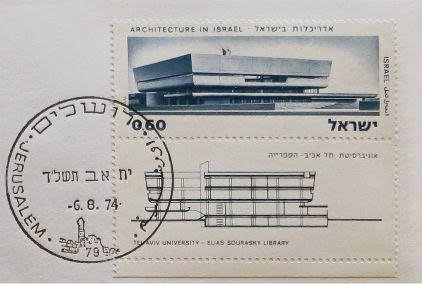 The building's lower floors, built in stone, integrate with the supporting stone walls and terraces, which go all through the campus and create the different levels according to the natural slopes.

Above these floors and terraces floats the huge mass of hammered concrete, which includes the reading areas and books. Striving to create an atmosphere of concentration and pleasantness, the various reading rooms, located in the upper levels, are open only to a quiet patio, which offers a pleasant view.

Elias Sourasky (1899-1986) was born in Byalistok, Poland but at an early age moved to Mexico, where he became a successful entrepreneur. He was also prominent in his support of scientific research and educational institutions in Mexico and Israel.

Information on the Lady Davis Technical Centre "Amal", Tel Aviv was more difficult. I wasn't entirely sure if that was her name or her title, as it seemed unusual for the area. Eventually I realized I had to sift through the McGill University and Jewish General Hospital (Montreal) references. Turns out it's her title, as the wife of Sir Mortimer Davis (the first Canadian born Jew to be knighted). The high school was built in 1972 and designed by Ram Karmi. 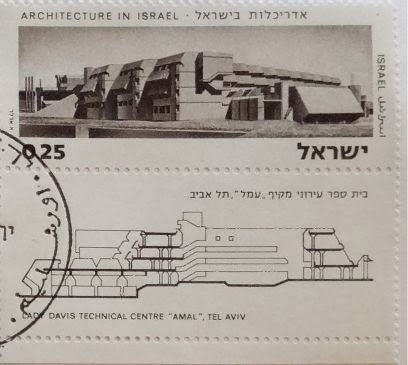 Lady Davis (Henriette Marie Meyer)was an active philanthropist, and was made an officer of the Légion d'honneur and Commander of the British Empire. I found an image of Lady Davis, but couldn't find her age when she died in 1963, though she and Mortimer were married in 1898. The Lady Davis Institute for Medical Research and the Lady Davis Fellowship are named in her honour.

and now we come to my favourite building (and stamp)
and, perhaps the most interesting.
and, the one with the most variations in spelling. 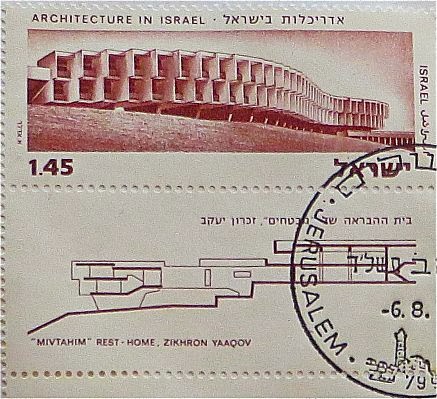 Zikhron Ya'akov is a small town 35 km south of Haifa.
Architect Yacov Rechter, who also designed the Tel Aviv Performing Arts Center and other iconic buildings, won the 1973 Israel Prize for the Mivtachim Sanatorium (1968)  part of a healthcare campus in the Carmel mountains. The elongated design follows the lines of the topography and is open along its entire length to vistas over the Mediterranean Sea. The 7,752-square-meter (83,441 sq. ft.) structure includes 91 guest rooms, halls and public spaces. It fell onto hard times and about ten years ago was bought by someone who planned to disastrously compromise the integrity of the brutalist building.. But after a prolonged public debate the new owner changed her mind and eventually the original architect's son, also an architect, became involved with plans to preserve the facade and the original woodwork. The renovated Mivtachim was set to reopen in 2012 as a boutique hotel with 80 rooms, an art gallery, two concert halls and a recording studio. I haven't been able to confirm if that actually happened, or if the project has been delayed. 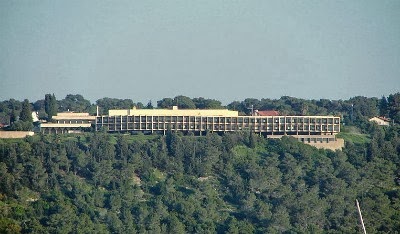 Here are two postcard images of the Mivtachim Sanatorium/Hotel in Zichron Yaacov which shows off the grand scale of the design. 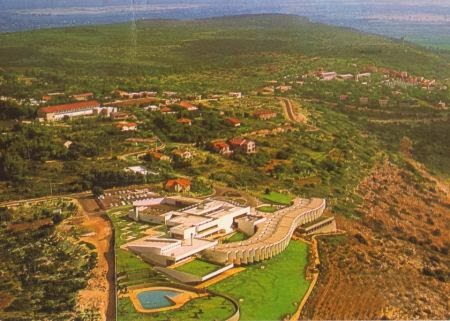