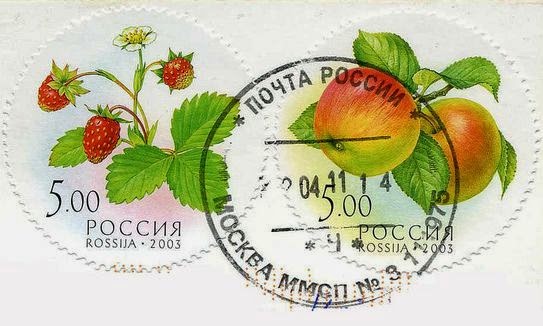 strawberries and apples from Russia - on a round stamp no less! these are part of their 'gifts of nature' series from 2003
below is the lower value Canadian definitives that came out in 1992.  Mistassini Quebec has a blueberry festival every August which may be the reason it was chosen for the FDC issue.

1¢ - blueberry from the temperate climate of eastern Canada
2¢ - wild strawberry grows across Canada. apparently there are three different types: woodland, field and seaside (found only in the west)
3¢ - black crowberry from the Arctic where Inuit and Indians dried or froze them and brewed the twigs for tea.
5¢ - rose hip from wild roses, one of the richest fruits in vitamins (25x vitamin C more than an orange). black crowberries and rose hips can both be used for sugar substitutes.
6¢ - black raspberry grows in moist to dry woods, mainly used for cooking and preserves
10¢ - kinnikinnick, the only one I'd never heard of before, grows in the north. they are high in carbs and considered a survival food. it seems to be known as 'bear berry' in French so it must be a favourite of the bears who are not eating blueberries
25¢ - saskatoon berry apparently has about 15 different names throughout the country. they make excellent jams and pies

now, if you'll excuse me, I think I'll head out and find some pie... or something otherwise fruity for lunch.