I referred to some excitement at seeing some coffee cups on my next to last post and was reminded by a Butterfly that not everyone would know what I was going on about.
Here's what you need to know

Tim Hortons is a fast food restaurant, though it is primarily known as a coffee and donut shop and there are more of them in Canada than any other fast food chain. They are in stand alone stores on main streets, on corners, highways, in shopping mall food courts, gas stations, big box hardware stores, grocery stores, hospitals, schools. There are stores that are strictly drive thru and there are stores that are open 24 hours. In other words, they are inescapable. It wasn't always so, but in the last 15 years the number of stores and throwaway, disposable coffee cups has pretty much exploded.
Some people who leave the country will bemoan that the one thing they miss the most about Canada is Tim Hortons. They mean the mediocre coffee and no-longer-in-store-baked crullers. They are a sad species. Except for the ones in Kandahar where there is also an outlet on the Canadian Forces Base for the military personnel. A teensy bit of home comfort for them.
Each year from early November until the supply runs out in January, Timmy's (for that is what we affectionately call it) changes their recyclable, takeout cups from the regular boring brown and comes up with a special holiday cup. The design is always different from one year to the next but features such feel good scenes as kids playing in the snow, snowmen, skaters, and of course hockey. The original Tim Horton was a hockey player and this features prominently in the stores promotion. 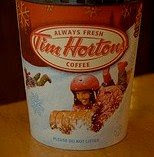 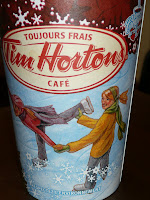 If you think this is fun, then wait till you see what happens to the cups in February.
No, really, you'll have to wait. But it is good.
Posted by VioletSky