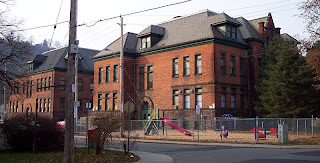 I will freely admit to being a little bit into house porn, though it is more the architecture that I admire than the decor. Not that I won't be found sitting in Chapters or Indigo with a coffee (even if it is, yech, Starbucks) and a slew of decorating magazines on a rainy afternoon perfect for dreaming... When I see a notice about OPEN HOUSE I take note. I'm always up for a nosey around an architecturally delightful building. So last weekend I wandered over to visit a Victorian school I had never heard of until I saw the article about it closing. I felt a little like an interloper among the many people reminiscing and looking at old photos as I'd never attended there, and it didn't really bring back memories of my elementary school as the one I went to was built in the 50's and was very different. (The photos don't reflect it, but there were a lot of people wandering about - I took these during the last 1/2 hour when it had quietened down.) Not having little kids around me any more, school is a foreign building. It has been many, many years since I was inside an educational institution, especially an elementary school. The original (!) tiny desks, the blackboards (not green ones, were they newer?) and the low water fountains - but sadly, not that big central circular sink that we used to have in the washrooms - were as they should be in my 1960's school days mind. 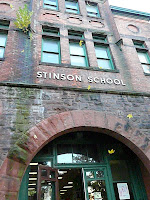 This is an example of one of the last Richardsonian Romanesque public buildings left in Hamilton. The school board is trying to close most of the urban schools and build more boring, uninspiring boxes for the students to commute to. What a way to make them love school. After an uproar from the community over it's proposed demolition, it will now be sold. It was declared an historical building so will not be torn down - though let us pray that it is not so neglected from disuse that it falls down as so many other historically important buildings have. It is hoped that it will be transformed into condos. And oh, what a lovely prospect that could be. Though, to be honest, it is not exactly in the most desirable area of town. 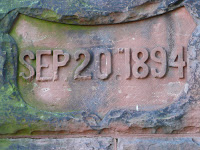 It was built in the late 1800's and 20 years later the school population had doubled in size so another building was built and attached by a long corridor. 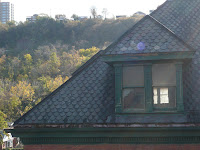 The roof is made of slate - note the original tiles on the photo at right of the newer building. 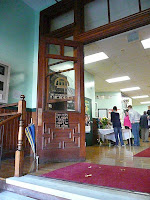 Each building has 10 classrooms and they all 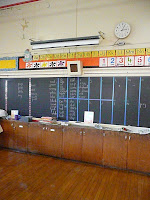 open onto a large square foyer of gleaming, polished hardwood floors. There are numerous wide stairwells, each one different but with lovely wooden banisters and some marble floors. 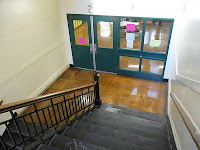 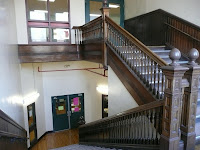 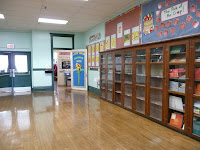 It is a minor miracle that all of these original features are still intact, though admittedly, it does look a little worse for wear - but at its age, a well deserved wear! 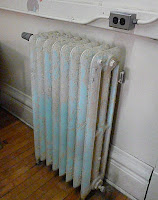 The heating is probably not the most efficient, and there is no A/C, but there are so many huge windows in a design for maximum cross breezes. The attic even has usable space - 10' ceiling at it's lowest - and great views up the mountain. 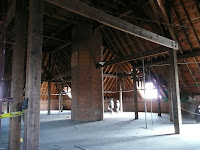 If I'm still in the area and still blogging, I'll let you know the outcome, because you know I'll be heading for the condo tours!
Posted by VioletSky