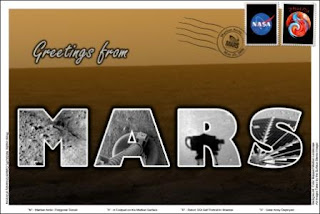 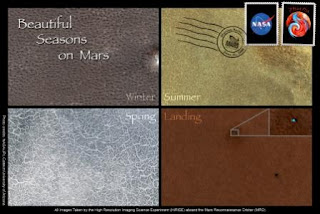 Beautiful Seasons on Mars: like Earth, Mars has seasons because it is tilted on its axis. Images show the seasonal changes in the Martian Arctic around NASA's Phoenix Mars Lander's landing site. The polygonal (cracked surface) terrain's results from this seasonal freezing and thawing. 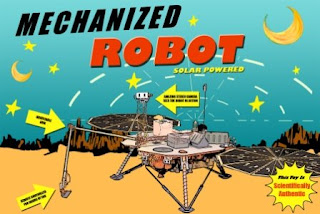 Phoenix Retro Robot: Growing up, many of today's scientists and engineers were inspired by sci-fi toys and the possiblities of exploring space. We commemorate NASA's 50th anniversary with the successful 2008 Phoenix Mars Lander and strive to inspire the next generation to turn science fantasy into reality.
created by James Egan

Has anyone else been following Phoenix M Lander's exploits on twitter?
It is believed that Phoenix has become frozen on Mars' North Pole where there is now little sunlight to power itself. He landed on Mars back in May and sent back 25,000 images after outliving his NASA team's expectations while exploring and analysing the red planet's surface. Maybe to combat a little loneliness, he even had a humorous and informative twitter account where he could express his excitement over finding water or answer questions, managed by a NASA employee who created a personality for the lovable little robot - and garnered quite a following.

some examples:
For everyone asking, here's a longish article on the possibility of surviving winter: http://is.gd/3KRL (um, I don't like that title). 11:32 PM Oct 8th from web

I saw this beautiful sunrise yestersol: http://tinyurl.com/55zoce Bittersweet, as it means an end to midnight sun in the Martian arctic. 3:35 PM Aug 26th from web 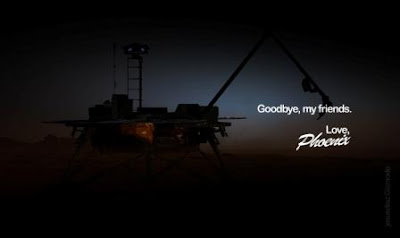 If you are reading this, then my mission is probably over.
This final entry is one that I asked be posted after my mission team announces they’ve lost contact with me. Today is that day and I must say good-bye, but I do it in triumph and not in grief.

As I’ve said before, there’s no other place I’d rather be than here. My mission lasted five months instead of three, and I’m content knowing that I worked hard and accomplished great things during that time. My work here is done, but I leave behind a legacy of images and data.
In that sense, you haven’t heard the end of me. Scientists will be releasing findings based on my data for months, possibly years, to come and today’s children will read of my discoveries in their textbooks. Engineers will use my experience during landing and surface operations to aid in designing future robotic missions.
But for now, it’s time for me to hunker down and brave what will be a long and cold autumn and winter. Temperatures should reach -199F (-128C) and a polar cap of carbon dioxide ice will envelop me in an icy tomb.
Seasons on Mars last about twice as long as seasons on Earth, so if you’re wondering when the next Martian spring in the northern hemisphere begins, it’s one Earth-year away—October 27, 2009. The next Martian summer solstice, when maximum sunlight would hit my solar arrays, falls on May 13, 2010.
That’s a long time away. And it’s one of the reasons there isn’t much hope that I’ll ever contact home again.
For my mission teams on Earth, I bid a special farewell and thank you. For the thousands of you who joined me on this journey with your correspondence, I will miss you dearly. I hope you’ll look to my kindred robotic explorers as they seek to further humankind’s quest to learn and understand our place in the universe. The rovers, Spirit and Opportunity (@MarsRovers), are still operating in their sun belt locations closer to the Martian equator; Cassini (@CassiniSaturn) is sailing around Saturn and its rings; and the Mars Science Laboratory (@MarsScienceLab)—the biggest rover ever built for launch to another planet—is being carefully pieced together for launch next year.
My mission team has promised to update my Twitter feed as more of my science discoveries are announced. If I’m lucky, perhaps one of the orbiters will snap a photo of me when spring comes around.
So long Earth. I’ll be here to greet the next explorers to arrive, be they robot or human.

It's been a great pleasure to have Mars Phoenix guest blogging for us [gizmodo], reminiscing back on a successful mission via its personality conjurer, the great Veronica McGregor at JPL—maintainer of Phoenix's famous Twitter feed. Just as Doug McCuistion from NASA said on the news conference today, it's certainly more of an Irish wake than a funeral today. We're drinking to you tonight, little buddy.
You can see all of Phoenix's previous entries and the official press release announcing the end of Phoenix's mission.
[P.S. you knew there couldn't really be new postcards today - it's a gov't holiday]
Posted by VioletSky