Several months ago I came across a site called POSTCROSSING which intrigued me so much that I immediately signed up to participate. Then I promptly did nothing more about it. When I read one of Scott's posts about his cat Orlando's travelling postcards, it took a few moments before the vague memory dawned... ah, he has discovered Postcrossing too! So I immediately found the site and tried to log on. Except I had no idea what my username or password was. See, I need lovely organizing file folders for everything. A special folder for my usernames and passwords. Yeah, that should help. Anyway, I signed up again, taking forever to come up with a name that would be accepted - I guess a few hundred more people had signed up and taken all the good names. I guess I could have just gone with VioletSky, but I wanted something different. So now, my cat whose name has morphed into Absynthe, is sending mail throughout the world through the wonder of postcards. Finland seems to be seriously over-represented - out of my first five requests for an address, three were in Finland. My next three requests gave me two more from Finland. Sure hope Finns like postcards from Niagara.

This is how it works. You register and create your profile with as little or as much information as you wish, then request up to five addresses for your first mailing. You get a user ID number for each postcard and must write that number on your card. Once the recipient gets your card they register that ID number and your name goes into the lot for the next person who requests an address. Eventually you will be getting mail with foreign stamps and pretty pictures from all over the world - or at least of the 181 countries where people have signed up. Or Finland.


It came from France, a place called Le Grand-Luce 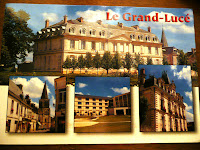